Welcome to my stop on the FMB Above the Universe Below Blog Tour! I have a great guest post for you, so keep scrolling! 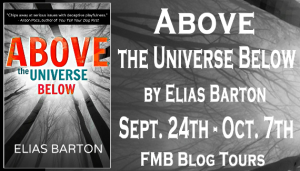 Title: Above the Universe Below

For two years running (2011 & 2012) Above the Universe Below was was a semi-finalist in Amazon.com’s Breakthrough Novel Award and Publishers Weekly:

“Brilliant writing carries this pleasantly odd tale of an agoraphobic artist, Carder Quevedo… Carder’s road is not an easy one, but readers will be rooting for him in this unusual and beautifully written book.”

An agoraphobic artist in our world but a grim reaper in another, Carder Quevedo hides at home, immersing himself in the paintings which commemorate the strange deaths he’s witnessed. He ventures into public only when necessary, scrambling to his hospital job to extract corneas from deceased donors or darting to the diner to share a meal with Darren, his only friend. That’s Carder’s existence – and he’s content.

Haika changes that. As the bored, beautiful owner of an art gallery – who also happens to be married – she stumbles into Carder in a chance encounter and soon becomes obsessed with his art. As they forge a quirky, electric relationship, Carder is reluctantly pulled into Haika’s social world of wealth, status and the peculiar characters that come with it. Carder is pushed further to the edge when his teenage niece visits, rebelling against her ultra-conservative upbringing. All the while, Carder’s hidden history threatens to ruin his developing chance at normalcy, and on the opening night of his art gallery show, his past finally catches up to his present and wreaks havoc upon them all.

“Grey Gardens is oozing with romance, ghosts, and other things.”

Inside. We often think of it as safe, protected, maybe even boring. Outside is where the adventure is, where action and energy resides. In the case of some people, people like Carder Quevedo in my novel Above the Universe Below, the two concepts and their meanings become entangled and contradictory. Carder grew up in a dark household with an agoraphobic mother. As a child, he was confined to home from the second he got in from school, and at times was even kept from attending school.

By definition, agoraphobia is characterized by anxiety in situations where the sufferer perceives the environment to be difficult or embarrassing to escape.  For those of us who’ve known anyone with agoraphobia, we know that it often keeps them bound to their sense of “home.” That’s what Carder has done, unsuccessfully struggling to keep as much of his life within his own walls as possible. He wishes he had an exoskeleton of armor.  For comfort, he counts the steps to his destinations.

Socially awkward people are often assumed to be lacking stimulating experience. We tend to assume that these people’s lives are boring, quiet and bland. On the contrary, Carder’s inner world rivals anything that happens in the “real world.” Since he was young, he began traveling to other worlds –worlds which he entered by diving within himself. They were rich in both action and drama and perhaps replaced events that he was kept from experiencing outside. And while some might find his character unsympathetic, they are reading about someone who never learned how to jump through the hoops of day-to-day social interaction. I find characters like this fascinating.  After all, what’s more interesting, a circus lion or an untamed lion in its own habitat?  Carder’s story may start out with him seemingly imprisoned by agoraphobia, but his interior events that helped him maintain a wild soul.

For me, getting to know Carder through writing this book has given me more compassion for and interest in anyone we normally think of as antisocial. As in the novel, there are often very real reasons why a person begins to fear the outside world and dive into their own microcosm. Those people just need the right person to tell that story, to reach out to them, to be curious enough to find out what that story is. In Above the Universe Below, that’s where a beautiful, lonely Haika comes in.

Not everyone is a grim reaper in another world like Carder.  However, writing Carder’s dark story helped teach me that every person on the planet has an interesting history.  Sometimes those histories are hidden in their homes, but often those homes are oozing with spirits and tales we can only imagine.

Haika’s mouth is obscured behind an empty Styrofoam cup riddled with repeating arches of gentle teeth-marks she’s bitten into it like colorless rainbows perforating white sky. She meets Carder’s gaze with a mischievous smile, enjoying the role of spectator and anthropologist. She’s relaxed, as if sitting in a bubble bath with a goblet of wine in hand, reading this all in a novel someone lent her.

That’s what Haika is: love. Not just love for Mike or art or New York. Haika is love in every moment. She’s loving to Carder, to his relatives, to the Carlisle boys. But she’s more. She’s love in the cloudless sky above, in the honey she brought for tea, in the music she tries to soundtrack Carder’s life with, in the thrift-store clothes she’s wearing, in the ascot knotted at her chin, in her bare feet sliding through what would once have been war-torn grass, in the sadness sometimes hiding in the corners of her lips. She brings love to every moment… something Carder has never seen in another person. Ever. He obsesses over every detail, and gulps down the harrowing thought that he’ll one day lose her. He tries to be love like Haika is, to laze on the hammock of friendship hanging from her eyes right now. He fills with gratitude. This has actually happened. She had actually been in his life, and no one can take that away. Carder could live off it for decades and fully plans to.

Elias Barton has lived on the edge of an active volcano, worked in a Bible factory and is the author of the novel “Above the Universe Below.” He was a semifinalist in both 2011 and 2012 for the Amazon Breakthrough Novel Award. He currently resides in Washington DC where he befriends gargoyles, feeds unicorns and combats two cats who try to smother him in his sleep.