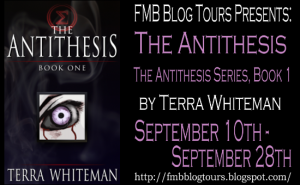 Welcome to my stop on the FMB Blog Tour for Antithesis! I have a great guest post on how the world for this book was developed, plus an excerpt for you. And a giveaway! Enjoy!

Justice Alezair Czynri is the newest recruit of the Jury, a group of powerful beings who reside in Purgatory and enforce the Code between Heaven and Hell. However, Justice Czynri could not have come at a worse time. A storm lays just over the horizon…

One that brings with it a war.

This is a story about God and the Devil, but not how you were taught to believe.

This is also a story about love and hate, and the suffering both can bring.

This is about rights and wrongs, and all of the spaces in between.

This is about revenge, courage, death, passion; with no villains, no heroes… only those left scorned.

This is a story about Heaven, Hell, and the Jury that holds them together.

This is The Antithesis.

HOW DID I DEVELOP THE WORLD/SETTING FOR THE ANTITHESIS?

I’ve always been a huge fan of futuristic science fiction stories, but I’ve also been really getting into the steampunk genre over the last several years. Because of this, The Antithesis’ main setting contains a combination of high technological societies with a Victorianesque feel.

The world where the story largely takes place, called The Atrium, is a planet whose main surface is a gaseous ocean, and its landmasses are actually suspended above it in inclined islands that the inhabitants call ‘layers’. A large portion of this story is science-influenced, especially in a biological sense, so I was compelled to create a world that would be specific to its inhabitants in an environmentally adaptable way. In this story, angels and demons are humanoids with wings, and a planet containing landmasses broken and suspended over the surface would be a perfect reason as to why wings would be necessary on an evolutionary scale.

Heaven exists on the upper layers, which are the warmest regions of The Atrium. Hell exists in the lower regions, where it’s cold and sunless. Because of this, Heaven flourishes while Hell is faced with famine due to poor growth environments, along with overpopulation.

The setting goes hand-in-hand with the theme and storyline. I was attempting to create mirroring conflicts that our world has faced and continues to face to this very day. Therefore, I had to think very carefully on the development of a world that is completely foreign in location and society(ies) to Earth, but at the same time is somewhat the same in a deeper, philosophical sense.

“God made man in His image” was actually something I kept thinking of while creating the world, but in this story that sentence means humans and Celestials are very alike in a natural sense; they share the same personal imperfections and failings.

One of the most important components of a compelling story, in my opinion, is the setting. It’s the entire foundation of a tale, not to mention it is usually the most defining trait of a genre. The Antithesis contains a very character-driven story, which delves into the personal lives of several different angels, demons and members of the Purgatorial Jury. The world itself shapes their lives and is used to emphasize their foibles, suffering, and perseverance.

The Terabicz Ruins was a collection of towers composed of black rock and sharp peaks, complete with floating circular platforms hovering in the sky like halos. Vines could be seen wedged between surface fractures, though I didn’t understand how any vegetation could survive in this perpetual darkness.

A winding staircase led to the first platform a thousand feet up. As we approached the base, Leid tripped over her own feet, landing on her knees.

I moved forward, but she shot out a hand to stop me. I froze.

Then she lurched, vomiting blood all over the first step.

I reeled back, eyes wide, fear rising in my throat. Leid only crouched on the steps, panting.

“Jesus Christ!” I shouted, the confusion and fear now propelling into anger. “Are you dying?!”

“No,” she responded coarsely.

Leid tried to get up, but collapsed. She attempted getting up a second time, made it one more step, but then collapsed again.

I frowned, kneeling in front of her with my back turned. “Get on.”

Reluctantly she crawled over me, wrapping her arms around my shoulders, legs hooking my elbows. She couldn’t protest this time; walking was out of the question.

I began up the stairs, Leid now on my back.

“Thank you,” I heard her murmur quietly.

The climb was exhausting, seeming to never end. Leid wasn’t heavy in the least, and in fact Vel’Haru could probably lift three hundred times their own weight; but the last four days of almost nonexistent sleep and nonstop traveling had finally caught up with me. I was tired, and it was showing.

I took a breather on the first platform. The second, I’d decided to just keep going. By the apex, I was staggering.

The apex platform was shockingly covered in moss. An iron gate surrounded a stone temple with a courtyard covered in…statues.

“What is this place?” I whispered.

I now understood why she’d placed the statue here. It would have blended in perfectly with the garden of others surrounding the temple. My eyes drifted over the platform, a frown pulling at my lips. Something didn’t feel right. It was so quiet, though that had been consistent throughout the entire area. I really couldn’t explain why I had this sense of impending doom.

Slowly, I carried Leid toward the gate.

My hand pushed against it; it opened with a creak.

I stepped inside, eyes surveying the courtyard.

It was isolated, save for the ever still and silent stone army surrounding us. I moved to the side of the wall, kneeling and letting Leid slide off. She collapsed against the ground, limply sitting up.

I had to admit I was a little pissed off for the fact that there weren’t any demons here. All of this for practically nothing? Though I supposed it would have been considerably bad otherwise since Leid could barely move and I currently wasn’t at my best.

I nodded, and she hadn’t needed to point out which statue was the target. Despite the clever hiding spot, it stuck out like a sore thumb.

Surrounded in marble soldiers and half-naked maidens, a woman knelt; arm outstretched, eyes wide and lips parted in the beginnings of a despairing cry. She seemed carved out of black glass, shimmering like an obsidian beacon within the otherwise white wash of the garden.

I momentarily forget about my sick noble, slowly moving toward it, seamlessly weaving through the other nondescript statues. My eyes were narrowed, head slightly tilted in curious awe.

I stopped in front of her, drifting over the details of her face; all the while my face had become a contortion of disarray. I spun, pointing at the statue.

Leid tried to respond but coughed instead. When she was finished, she tried again:

“Will you just kill it, please? We’ll talk about this later.”

“With your fists, you genius. Smash it to bits.”

“Exactly how were you expecting to destroy this thing on your own, by the way?”

“Shut up and finish it!”

“Not until you take back what you said.”

Leid stared, falling silent. She knew what I meant.

I waited, silent as well.

Conceding, she looked away shamefully. “I was angry; I didn’t mean it.”

“I would never regret meeting you, Alezair. I’m sorry.”

Though I’d coerced her into saying this, I could tell she was being sincere. Her expression was somber, painfully so.

I grinned. “Thanks. One pile of black sand coming right up.”

I turned, just as a thwump broke through the air. I felt a pinch. My grin faded into a confused wince and I looked down at the source of the sharp pain.

…There was a dart sticking out of my chest.

I looked up at Leid, though my vision was already beginning to blur; the world around me swayed. She was screaming something, pointing behind me, but now everything was moving in slow motion and I was having trouble comprehending.

I was about to turn but was tackled; a group of hands held me down, shoving my face into the moss. I thrashed, snarling, still strong enough to fling some of my assailants off. But each time a pair of hands left, another instantly replaced them. I couldn’t see anything—just a cluster of feet as the crowd scurried around, trying to keep me down.

Another group of feet left the crowd and began for Leid, who at this moment was hopelessly trying to crawl away. As they got further from us I could see them clearly:

Demons. Tons of them; at least two dozen.

Instead of retreating for the gate, Leid deliriously went the wrong way. During the struggle I’d been shoved about twenty feet from the statue. She was crawling toward us.

The demons pursuing her eventually backed off, waiting at the first row of statues. When Leid passed the third row, a shadow slid out from one of them, advancing slowly in a steady, calculated gait.

I squinted, teeth clenched and still struggling, trying to see the demon clearly. And then I did.

It was Caym Stroth, Raith’s second general. Unusually dressed in a black suit, the Obsidian Court insignia on his right shoulder, he held a giant serrated axe, swinging it nonchalantly at his side. He whistled an unfamiliar tune as Leid scrambled toward the statue. It seemed she was too delirious to even see him.

“Leid!” I screamed, though it was pointless because she couldn’t hear me. “Leid, behind you!”

She was now within a foot of the statue. Gasping, she reached toward it with a trembling outstretched hand.

Caym stopped behind her, lifting the axe over his head, his lips curling into a malicious sneer.