Today’s #FeatureFriday author is Tim Mettey! I was lucky enough to read and review his first book, Secrets, shortly before it came out. The main character, Nicolas, showed great courage and acceptance of what path life had in store for him, which made him very interesting to read about.

As the series progresses, Nicolas and Elle face incredible situations and learn a lot about not only their history, but themselves. They grow as the face challenges no “normal” teenager would have to face, and I can’t wait to see how the series ends. 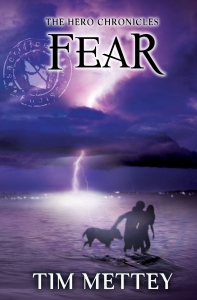 The first book in The Hero Chronicles series, Secrets, was published in 2014. I learned a lot while writing the book, but the most important thing I learned was patience. I worked on the story for years. At first I wanted to rush to get it into some format that I could share with others, but thanks to the encouragement I received from my friends, I took the necessary time to edit and get it ready for publishing.  And I am so glad I did.  I’ve continued refining my writing process through the other books in the series.  I have a great team of editors, graphic designer, and publicists who help me with the process as well.

My inspiration for The Hero Chronicles series has always been the men, women and children that have either stood up for someone or risked everything for someone, no matter what the consequences were. The main character in this series is Nicholas Keller.  Nicholas is a typical teenager in many ways. He struggles to find his identity and his place in the world, just like most teenagers. Nicholas has qualities that make him extraordinary and unique, but he has to go through a long journey of self-discovery. Nicholas is forced into circumstances that make him stand out from everyone else around him, and these circumstances transform his life and the lives of those he loves. I feel very connected with the main character; a lot of the feelings and things that happened to him in the book were pulled from my past. The personal connection I feel with Nicholas helped to develop his character and to make the story more dynamic.

The Hero Chronicles series will consist of 7 books.  Currently books 1 through 4 (Secrets, Trust, Fear, and Power) are available. The fourth book in the series, Power, was recently released in December 2015.  I am excited to share the rest of the story with readers over the next few years. I am currently working on the 5th book which will be released in late 2016. Thank you for reading!

Tim Mettey serves as CEO at Matthew 25: Ministries, an international humanitarian and disaster relief organization. Tim uses his many experiences and expertise in responding to disasters around the world to set the background for his The Hero Chronicles series. Tim struggles with and has overcome multiple learning disabilities with reading and writing to create this series. Tim advocates for literacy and education worldwide and hopes his journey can be an inspiration to others. He says, “Our disabilities do not define who we are, they make us stronger.”

Tim is the father of four beautiful daughters: Olivia, Cora, Noel and Ashlyn.