It is my pleasure to announce the release of Shield of Health by Bill Talcott! I was lucky enough to get to edit this book, and I’m so happy these characters came back! 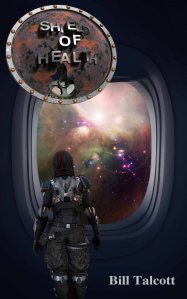 Shield of Health is a story of Greed and Consequences.

Mercenaries Vince Jacobs and Don Grisio are friends whose lives are altered by a terrible accident. Don embraces his guilt and puts himself on a path of self-exile. Vince tries to make amends for their mistake by using a corrupted government agency known as the Shield of Health.

Wait, what’s that noise? I’ll be right back…

Well now, Kiddies, this is such a pleasant surprise for your Dear Old Uncle Bill. The bars? I’m told they are for my own protection. But don’t worry, this is just a lay-by for your Dear Old Uncle Bill. A stop on the road to better things. The accommodations here are actually first rate. Three squares, a dry bed and a loose bar in the window. Shh, we won’t mention that to anyone.

Alright, alright! If you must really know, your Dear Old Uncle Bill was someplace that—maybe he shouldn’t have been. So what if it was the Kristufek house? How did I get caught? Your guess is as good as mine. There’s no way she could have discovered that cozy spot in the basement, and that hide-a-way in the attic was way too clever. I’m sure it had nothing to do with those after hour trips to the ice box. And I barely touched the contents of the liquor cabinet. With as much as she keeps in it, she would have hardly noticed the few bottles that were missing. Your Dear Old Uncle Bill may have gotten just a bit careless. Perhaps it was that copy of Shield of Health I was reading. I may have laid it someplace where she discovered it.

Shield of Health? Well, Kiddies, like mine, it’s a tale of hard lessons learned. But what tale isn’t? What separates this tale from most others is that it’s a prequel to The Mission and the second book in the Remnants of the Past series by that fine young chap who shares the same name as your Dear Old Uncle Bill. Bill Talcott seems to have this obsession with mercenaries in other places and times and just loves to tell sordid tales about them. See for yourself!

Meilleurs was busy and the VIP dining room was full to capacity. Waiters and maître d’s rushed in and out of the kitchen trying to keep up with the orders. Senator Tyrell sat at a table in the back corner of the dining room. He gave forth a satisfied moan and pointed at his guest’s plate with the tip of his fork. “You must really try the sleondegi. It is quite exquisite.”

In a calm and low voice, the senator’s guest spoke from the shadows. “So far, we’ve approved of the way you have been handling matters.”

The senator took notice of the praise he was given. “Why, thank you,” he said, grabbing the napkin from his lap to dab at a trickle of juice running down his chin. And then, with the skill of a seasoned diner, the senator stopped the maître d’ as he walked by the table. “Can I get another order of the balut?”

Senator Tyrell looked at his guest’s plate. Neither the utensils nor the food had been touched. “Perhaps we can order you something else?”

“That won’t be necessary. As I was saying, we’ve approved of the way you’ve been handling matters, but recently, we’ve noticed a couple of loose ends.”

The senator let his hand rest on the table next to his plate. Sauce from the sleondegi dripped from the end of his fork onto the table cloth. He appeared genuinely concerned. “Loose ends?”

The senator’s guest leaned forward and stopped just before his face reached the light. “Jonas Stanhouser and Vince Jacobs. Mr. Jacobs has located members of the Undead we knew nothing about.”

Senator Tyrell, along with other members of the senate, had been paying close attention to the mercenaries Vince had recently brought to the Home World. The fact that the senator’s guest did not mention Helga had him questioning her loyalty to him. “I can assure you and your people that I have a firm grasp of the situation.”

The senator’s guest rose from his seat and somehow managed to remain in the shadows. “Let’s hope so. It would displease me and those I work for if I had to return home with a negative report.”

“Don’t worry,” the senator said with an air of confidence. “All that is required of us is patience.” He then brought the fork up to his mouth and removed the tidbit from the end of it with his teeth.

The dark figure looked down at him. “Enjoy your meal,” he said, not even trying to hide the revulsion he felt toward the food he left on his plate. He turned, and like a shadow, he moved through the dining room, drawing little or no attention to himself.

Senator Tyrell watched him leave and then looked across the table at the full plate of food. “Hmm,” he mumbled to himself. “It appears our friend doesn’t have the stomach for the finer things in life.” He reached across the table and switched his empty plate for the one his guest left behind.

The senator looked up. The maître d’ had returned with the second helping of his meal. “Be a good sport and just put that over there for now.”

”Yes, sir.” The maître d’ sat the plate down and left Senator Tyrell alone to figure out how he would deal with his so-called “loose ends.”

Back so quickly? So what did you think of our little story? Tasty huh?  Hope the senator saved room for desert. What’s that? Of course I removed the bars from the window. Oh hush now. This isn’t the last you’ll see of me. Now I must go and make use of this window of opportunity. Until next time, Kiddies.

Shield of Health is the second book in the Remnants of the Past series by Bill Talcott. It was edited by Tricia Kristufek, the very kind host of this blog and subject of your Dear Old Uncle Bill’s shenanigans.

Like certain characters in Shield of Health, your Dear Old Uncle Bill is always trying to right his wrongs. There have been many. Just wait until Ms Kristufek looks in that closet under the stairs. Oh my! Here is a peace offering of sorts. Take this code now (LD95E) and use it to get nearly half off of Bill Talcott’s newest release, Shield of Health, at Smashwords. Quick, before she looks under the stairs!

You can visit Bill Talcott and your Dear Old Uncle Bill at Facebook  or on twitter. You can also find him at goodreads.

Hmm… must have been the wind. Well, as I was saying, get your copy of Shield of Health and follow the mercs from The Mission once again!