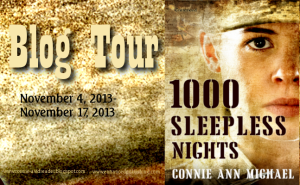 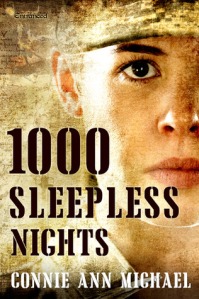 Twenty-two year old Corpsman Emme Sawyer doesn’t follow rules. She’s always been the best and no one will die if she has anything to say about it.

Emme refuses to hang around the hospital waiting for the wounded to come to her and joins a Marine unit heading into Helmand Providence, the largest opium producer in Afghanistan. Shutting off her emotions, Emme focuses on what she does best…keeping her men safe. When her best friend is obliterated by a roadside bomb, Emme

begins to realize she can’t save everyone. Seeking comfort from Raven, her commanding officer, Emme develops feelings that don’t belong in a combat zone where each step could be your last. As Raven reciprocates, Emme learns you can’t choose when and where love finds you.

You can add 1000 Sleepless Nights to your to-read list on Goodreads:

You can also find 1000 Sleepless Nights on the Entranced website:

You can buy 1000 Sleepless Nights here:

Guest Post: How did I get the ideas for my characters?

Okay, not to sound like a dork but growing up I had this habit of escaping into television and movies.  I would add myself into the show as a character and create this new story line starring me!  So the character of Emme “Doogie” Houser came from a character I had created to add to the show China Beach.  I am embarrassed that I actually was in my mid twenties when I came up with that character.  I named her Emme because it is a little girl name and I wanted there to be that contrast with her military persona and her persona outside of the military.  I added Doogie when because her age in the book was initially nineteen and I needed to show how she could be a medic at such a young age so I made her super smart like Doogie Houser.  I think my answer to this question is greatly dating me. Raven is kind of based off two characters, one from China Beach, a guy that would emerge from the jungle and had feelings for McMurphy, a nurse, but couldn’t show his emotions.  As well as from the movie Black Hawk Down.  He is Navajo because the Navajo culture fascinates me and he is the second Navajo character I have included in my stories.  My new book Entrusted also has a Navajo cast.  Their intense and quite demeanor is great for Raven’s personality.  I named him Ravenscar because; one Raven’s are my talisman animal, but more importantly it is the name of a secluded coastal town in Great Britain.  I thought the solitude of the location was metaphorical for Raven’s difficulty reaching out to Emme.  Tahk is based on my husband.  The constant references to sex and the teasing is very much my husbands personality.  I love Tahk and find he is a favorite of many of my readers.  He has a bigger than life personality but a heart of gold, just like the hubby.  The sub characters are named for friends of my kids.  The first soldier to be wounded was my oldest son.  He didn’t appreciate that.  🙂

There is a tour wide giveaway for the blog tour of 1000 Sleepless Nights. Here is what you can win:

Here is the link to the tour wide rafflecopter giveaway:1000 Sleepless Nights Giveaway 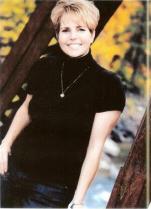 Connie Ann Michael was raised a city girl, but was converted to a country girl after college and now resides in a speck of a town in Central Washington State.  She is married to her former boss as she worked at the local Pizza place and has two college age boys that provide endless material for her books.  She loves the outdoors and can be found mountain biking, kayaking, or camping with her family.  Being a busy family, she can be found working on her newest novel while on long road trips.

You can find and contact Connie Ann Michael here: