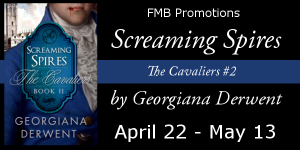 Check out this Vlog from author Georgiana Derwent! 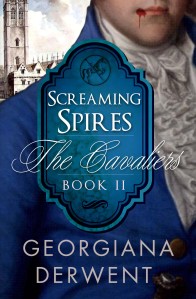 A Tale of the Posh, the Privileged and the Paranormal…

The Cavaliers are the most elite society at Oxford University – rich, powerful, and beautiful. No one realises that they are no ordinary students, but a group of aristocratic vampires from the English Civil War. For four hundred years they have groomed the most promising students to run the government, police, and finance in the way the vampires wish, granting them eternal life in return for absolute obedience.

In her first year at Oxford University, Harriet French became inextricably tied to the Cavaliers. Now Harriet’s back at Oxford for her second year. Armed with a vampire boyfriend, some great friends and the truth, she’s expecting an easier time.  She’s wrong.  Her best friend is now a vampire and the Cavalier who turned her to save her life is facing death for the one good deed he’s ever done. Just when it seems that things can’t get any worse, the Cavaliers’ ancient enemies decide to strike at the heart of the society and they’ve got Harriet in their sights.

Screaming Spires continues the story of an ancient vampire conspiracy and the ordinary girl caught in its web begun in Oxford Blood.

“Dance with me,” someone said suddenly, taking hold of her hands in a way that left no room for argument.

With a sinking feeling, Harriet recognised George’s voice. She forced herself to stay calm as she looked up at him, pristine in his tailcoat and Cavalier bowtie.

“Dance with you? Are you insane? You killed my cousin. You kept my necklace hidden for weeks. You mesmerised me whilst they drained Caroline. If I had the strength, I’d kill you.”

George smiled and shook his head. “No you wouldn’t,” he said firmly, leading her onto the dancefloor.

Before Harriet had a chance to take stock of the situation, they were in the middle of the marquee. She moved to the music as though she had no control over her body, allowing herself to be alternately spun around by George and pulled into him.

“So don’t I get a thank you then?” he whispered after a particularly vigorous twirl.

“I don’t know how you have the nerve even to speak to me, never mind to ask for my thanks.”

“I gave you what you wanted,” he said, pulling her closer. “I gave you your best friend back. If I’d asked you beforehand, what would you have said? Let her die or change her?”

Harriet was finding it difficult to concentrate on the conversation. The marquee was hot and full of people; the music was loud; the dancing was too vigorous. She needed to sit somewhere cool by herself and get her thoughts in order. Instead, George’s deep green eyes were boring into her, his cool hands were gripping hers, and it was becoming harder by the minute to remember all the terrible things he’d done. Harder still to push him away.

Georgiana Derwent read History at Oxford University. Aside from the vampires, The Cavaliers Series is an exaggerated but fairly accurate portrayal of her time there. She now works in London and lives with her fiancé. He’s been very supportive throughout the writing of her books, mainly because he likes to claim that all the most attractive characters are based on him.

Georgiana fell in love with vampire novels after reading The Vampire Diaries back in 2000. At the time it was a struggle to find any similar paranormal romances, a situation that it’s fair to say seems to have been rectified in the last few years. She now loves paranormal series, fantasy novels, and modern literary works in roughly equal measure.