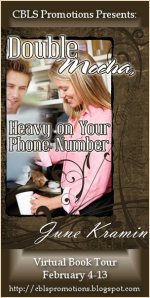 Double Mocha, Heavy on Your Phone Number by June Kramin

Unable to make it home in a snowstorm, Ellie seeks shelter at an old farmhouse. When the owner’s grandson shows up and happens to be the man she had given the brush off to twice, it takes all they have not to kill each other during the snowed-in days that follow.

The last thing Ellie plans on is the relationship outlasting the storm. Bix’s persistence at a relationship and attempts to help her at her job with his computer skills proves to be more than Ellie can continue to push away. She finds herself where she never wanted to be after losing her fiancé a year ago. In love again.

When Ellie’s twin sister shows up and puts all their lives at risk, they must now weather a different kind of storm together.

Bix was surprised to see Ellie standing in the kitchen when he walked in her house the following Monday. He was hoping to surprise her when she got home from work. She must have left a little early.

“You’re home?” He walked over admiring her hair then gave her a kiss as he ran his fingers through her hair. “What made you go dark?”

“I do.” He kissed her again and weaved his fingers through her hair and to the back of her head.

She wrapped her arms around his neck and began kissing him hard. Getting more aggressive in her kisses, she began pushing him backwards until he was against the wall.

“I just missed you.” She kissed his neck then pulled at his shirt, sending buttons flying. Her hands stroked his chest and went down to his belt buckle.

He closed his eyes and leaned his head against the wall as she kissed down his chest. She slid his jeans down, but left his boxers on. Kissing her way back up his chest, she placed her hand at his crotch. He was already getting aroused. “Nice,” she said, giving him a squeeze. Kissing him harder, she began rubbing her hips against him.

“Let’s get down to business, stud.”

His eyes sprang open and he held her by the shoulders, then looked into her eyes. They were the same shade of blue. The same deep blue outline. He looked from one to the other, then saw it. A green fleck that was never there before.

“Dammit.” Her hand still stroked his chest. “You’re quicker than Tony was.”

He pushed her back and quickly pulled his jeans up. “Ellie never mentioned being a twin.”

“It’s no wonder. I’d want to keep you to myself, too.” Again she leaned into him and tried to place her hand on his crotch. He grabbed her hand before she was successful.

He moved away from the wall so she would stop cornering him. “I don’t know what your game is but—” The sound of a car door closing stopped him.

“Dammit. The party pooper is home. We’ll have to finish later.” She looked to Bix again and ran her tongue over her lips.

Bix tried pulling his shirt together the best he could, but it was a useless attempt with his buttons scattered across the floor.

Thanks for the guest spot on your blog & for joining the barrage!

Double Mocha, Heavy on Your Phone Number was a lot of fun for me to write. Some stories just flow and this was certainly one of them. It was fun using my home and town for the setting. The coffee shop was made up but I had a friend swear it was the one by her (just a few towns away).

My female characters are usually a handful, and Ellie was no exception. The saving grace was her brothers, Nick and Nate. I’ve been told by a few people that they were their favorite supporting characters – ever.

I’ve always been obsessed with twins so it shouldn’t have surprised me when Nancy showed up. I honestly had no clue it would take that route. Did I forget to mention my characters always run the show? In this case, I was grateful. Bix will forever be one of my favorite hunks. This was my 1st suspense and I loved how it came together. Hope you do, too. 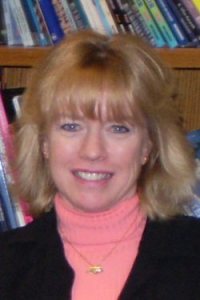 Wife, Mother, Writer, Lunatic. Not necessarily in that order.

June, who prefers to go by Bug, was born in Philadelphia but moved to Maui, Hawaii when she was four. She met her “Prince Charming” on Kauai and is currently living “Happily Ever After” on a hobby farm in a small town in Southern Minnesota.

She enjoys riding her Paint horse, Ringo, around the small ghost town they are playfully reestablishing with the neighbors and playing in Photoshop. Her son and daughter are her greatest accomplishments. She takes pride in embarrassing them every chance she gets.

Being hopelessly addicted to 80′s music is her super power.

Error: Twitter did not respond. Please wait a few minutes and refresh this page.