Synopsis: Kelly McGinnis has spent her adult life trying to do the right thing, but as a newly down-sized mother of twins and the wife of a man living with Muscular Sclerosis, she also knows that trying isn’t always enough.
While interrupting a scene of police brutality, Kelly unwittingly releases a real, live demon. After she manages to kill the creature through gut instinct and blind luck, she is approached to join a secret group of demon hunters who reveal an underworld of monsters and magic. Kelly’s mill town upbringing proves an unexpected asset and the pay more than covers her husband’s treatments, but the work begins to undermine her sense of right and wrong as she struggles to maintain her ‘normal’ life.
When she encounters Umber, a compelling incubus with an unexpectedly human story, Kelly learns that the truth is far stranger and more terrifying than she imagined.
Read a Sample Chapter to No Good Deed. Purchase a copy of No Good Deed on Amazon. See my review. 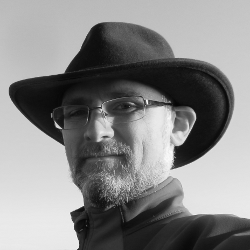 AuthorBio: Bill Blais is a writer, web developer and perennial part-time college instructor. His novels include Witness (winner of the Next Generation Indie Book Award for Fantasy) and the Kelly & Umber urban fantasy series. Bill graduated from Skidmore College before earning an MA in Medieval Studies from University College London. He lives in Maine with his wife and daughter.