Today I have with me author Kevin Anthony talking about why he didn’t include vampires or werewolves in his Urban Fantasy series. Mad Moral is the first book and it’s currently free on Smashwords (link below). I admit, I grabbed a copy – the characters look interesting. So, for all you thriller/horror/urban fantasy lovers out there, check this one out!

No Vampires or Werewolves Allowed

I’m a big fan of vampires and werewolves, but I didn’t want to travel down a road that had been explored so many times. I decided to give a new set of beings time to shine in more humanizing roles, horror movie characters.

I’m aware the word “horror” instantly causes many to lose interest. My novel isn’t a horror, just inspired by the many elements and characters of horror movies.

Imagine as I did, horror movie villain Michael Myers dropping his children off at his parents’ house for the weekend and heading out on his first date post-divorce. After a disaster date, to blow off some steam he decides to head to the nearest college campus and slash some sorority girls. He spends the morning after sipping a cup of coffee as he watches the tragedy coverage unfold on the morning news.

That visual sparked my series about a mad world where others like the horror movie villain mentioned are your friends, neighbors and lovers.

My first main character I created was a young adult named Ford Fischer. He’s a slasher, unemployed and does his best to live a straight and narrow lifestyle. I was raised by a single mother and I consider my sister my best friend, so I had to have strong female presences in my story. Ford’s mothers play huge roles and both are bystanders or victims in this mad world I created.

Another main character is an exorcist named Sidnee Vincent whose romantic life is constantly sabotaged by pesky demons. I’m sure we all have a bit of evil in us all and she just happens to have the ability to communicate with it. My final character I included was a dreamer named Milo Amos. His identity is questioned the most by readers who haven’t started the series yet. His character enters dark nightmares every time he sleeps and must fight for his survival or risk death not only in his fantasy existence, but reality.

This novel faced the toughest set of critics yet, teenage girls. I posted it on website mostly used by those in that age range. It sometime took a lot of convincing and me constantly explaining it wasn’t entirely about blood, gore and things that go bump-in-the-night. I’ve received a lot of positive feedback from these young readers who instantly started to root for my characters to overcome the madness in their lives. I encourage putting all pre-judgments aside and giving my novel, Mad Moral, the opportunity to entertain you. 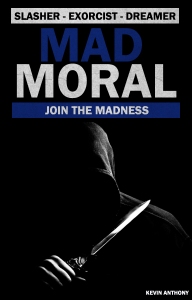 Mad Moral is the world of Ford Fischer, where in murderous stuffed animals, demonic possessions, gigantic creepy crawlers, knife wielding slashers and much more madness are common place. Fischer, coupled with a romantically conflicted exorcist and a dreamer who redefines night terrors, leads us through a twisted world that can be best defined as one of a kind.

The 80, 000 word, urban fantasy novel is only the beginning of the Mad series.

Chapter 15 – Interested: He thought his ears were playing a sick game as he overheard a familiar scraping sound. Ford spun round to learn he ears had not lie, the serial-slasher still stalked him. Ford expected a rematch, but not this soon. He was exhausted from the feet travel. His body was not prepared for a fight. He gathered the little strength he had and took off running. A block ahead, he noticed the exorcist parked in the lot of a burger restaurant.

He ran up to her driver’s window of her car and frantically banged against it. “Sidnee let me in.”

She let out a scream and placed her hand against her chest. “Ford…”

She slightly lowered her window. “You scared the shit out of me.”

He glanced over his shoulder, nobody insight, and refocused on her. “I’ll reimburse you for gas.”

She searched behind him, wondering where he came from. “What’s wrong with you?”

He tried to appear calm. “Nothing, I’m fine.”

“You’re sweating and look as if you’re about to wet your pants.”

“You guessed right,” He lied. “I have to use the bathroom.”

“Fine,” Ford shouted at her. “Somebody’s trying to kill me so open the damn door!”

Available on Smashwords – No Charge