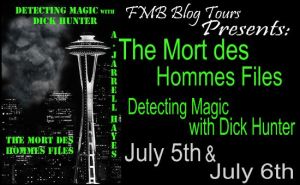 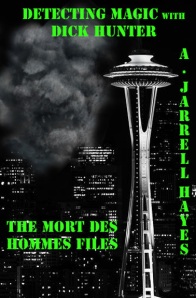 “What begins as a routine missing person case for Seattle’s best private investigator, Dick Hunter, turns into a personal vendetta against a cruel murderer. The murderer, Mort des Hommes, happens to be a hell spawn possessing powerful magic. To solve the case, Dick Hunter must join forces with a wacky cast of magic creatures in this wild and fun romp.”

When I recall what I saw that day, I can scarce but wonder why I didn’t go insane. On the ground was the body of Mr. Hollis, bloody and torn but still barely alive and breathing. He was twitching on the grass like a chopped up inchworm. One arm was detached from the rest of his body, and the fist of that hand was clinched. Dangling freely from his torso was his intestines, pulled out from a huge gash in his lower stomach area. Blood flowed freely from his many wounds. Blood splattered Mr. Hollis’ face, too; and by the looks of things, it was his own blood at that.

There was a man looming menacing over his tortured body: a white gentleman in his early sixties, slim and in good shape, with cold blue eyes and a tuft of white hair sticking out from under his smoke gray derby hat. He’s wearing a black suit with a white shirt and simple black tie, a long gray wool coat over his suit. He held a spear in his right arm, and the tip of it was pointed at Mr. Hollis’ forehead.

I couldn’t simply stand and watch the murder of a man without attempting to stop it, so I pulled out my pistol and aimed it at the old man that looked like a reject from The Godfather movies. “Drop the spear!” I ordered.

The old man looked at me as if he hadn’t noticed that I was there beforehand. A sinister and arrogant smile formed across his pale face, and he spread open his arms as he faced me—he was daring me to shoot him!

I wasn’t going to shoot him as long as he didn’t threaten me. I was hoping he wouldn’t, because that would be a heck of a lot of paperwork to fill out at the police station. I was hoping that he would let go of the weapon he borrowed from Fred

Flintstone and allow me to apprehend him and call the police. But, of course, life never is that easy, is it?

A. Jarrell Hayes is a fiction writer and prize-winning poet. He has authored over a dozen books of fantasy fiction and poetry. In his spare time, he designs t-shirts, hats, buttons, and more for writers, poets, and readers. He invites you to visit his website at http://www.ajhayes.com.