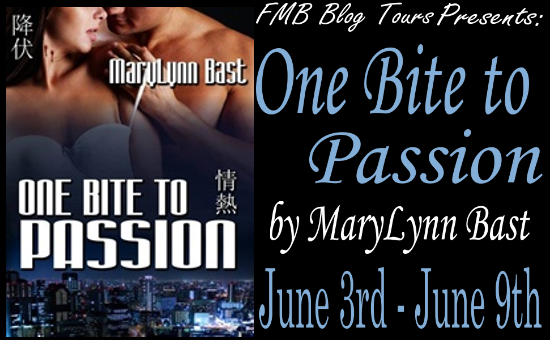 Title: One Bite To Passion

On a business trip to Japan, Paige has just found happiness with Casey, an exciting, young man with a passionate interest in Paige.  After a night of wild sex, feels like a new woman. Drawn to Casey, Paige can’t refuse him even though he says he wants to possess her and she learns he is a vampire. Then Paige’s unfaithful husband, Dalton, shows up. He has supposedly broken off his affair, but Paige suspects he is still seeing his mistress. Soon, Paige begins to notice disturbing things happening around her and discovers she has become the center of a battle between covens who consider her The Chosen One. But when she faces the greatest peril of her life, and Casey shows up to help, Page realizes she is willing fight the covens side-by-side with him, if it means the chance of a future with this vampire she has come to love.

His tongue licked gently across her lips and she sighed, leaning into him, allowing him access. She threw caution to the wind and went with it, her tongue met his tentatively. Like she did, he tasted of wine and beer. Warnings bounced around in her head, telling her this was not supposed to be happening. But she was sick of being uptight. Tired of always doing just the right thing, constantly worrying about what would happen if…

With her arms to her side, Casey pulled her to him. One hand going to her waist, the other lifted and his big hand cupped the side of her face tenderly. Her arms lifted and her hands came to rest on his shoulders. She had to do it now. Push away or she wouldn’t be able to. She fought with her emotions while his tongue fought to go deeper into her mouth.

She relented, giving in to the heat of the moment. Her hands snaked up around his neck, the other into his soft hair. She pulled him closer and kissed him back.

She heard Rosa giggle but was too engrossed in the lips and tongue devouring her to pay any real attention. Paige heard the rustle of clothing and thought vaguely that Rosa was allowing Tadd to remove her shirt. She had never done anything like this before, not with another couple in the room. The thought terrified her, yet it also turned her on even more. Groaning, she deepened the kiss and pressed herself against Casey’s muscular chest. It felt good to be held in strong arms.

The room was hot; the windows were open to let in the evening air. The fans circulating thick humid air did nothing to cool the heat of bodies in the room. The military base didn’t have air conditioning in any of the buildings accept for commanders quarters and offices. The barracks and lodging buildings were supplied with oscillating fans. But none of that mattered. Paige wanted to feel him holding her, his skin touching her, him inside of her. She broke the kiss and buried her face in Casey’s shoulder, trying to catch her breath and make sense of what she was doing.

When she looked up, Rosa and Tadd were going at it hot and heavy on the couch. His pants were unbuttoned and pulled down far enough that Paige could see the top of his ass cheeks. Hips rocked back and forth against Rosa while she ground against him.

Casey saw her look over and he glanced too then gave her a lopsided grin. He slowly leaned forward, giving her time to either move away or meet him half way.

Oh, what the hell, she met him half way and this time, the kiss was slower. His tongue delved into her mouth and licked at her in slow sensual moves that had her wanting to straddle him like Rosa had straddled Tadd. The rustle of clothing sounded again.

Paige heard Rosa and Tadd getting up from the couch.

Rosa met her eyes over Tadd’s shoulder and winked. Turning around, her back to Tadd, she grabbed his hands and placed them on her breasts. He was eager to oblige and began to massage her bared perky mounds, pinching at her dark rose colored erect nipples.

MaryLynn Bast resides in Las Vegas when she is not traveling the world with her job as a contractor with the US Military. Bast enjoys writing paranormal fantasy romance erotica stories because she can allow her imagination to run rampant, her characters can obtain abilities not possible in the real world…or are they?

4 thoughts on “FMB Blog Tour: One Bite to Passion”