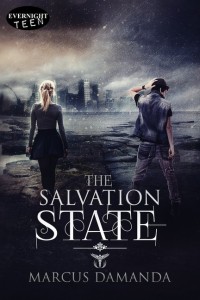 “This is what the truth is. Second Salvations murdered my parents, and I’m running away.”

It’s here! The latest from Marcus Damanda is a dystopian take on the world, bringing Rebecca and Daniel together for a journey that will change their lives forever.

With beautiful cover art by the talented Jay Aheer, and and ~Editor’s Pick~ from yours truly, and great characters, The Salvation State has it all. It’s the beginning of the end, and you’ll want to stay up to find out what happens next!

A single post over unregulated Internet channels. A sleeping society awakens to a chase, broadcast live on television screens all across the New United States of America…

Rebecca and Daniel have never met. A fifteen-year-old preacher’s kid and a sixteen-year-old atheist outcast, they appear to have little in common. And yet they have both attracted the attention of a recruiter for Angel Island, where bad kids go to be remade—or destroyed.

Agents of the all-powerful New America Unity Church will stop at nothing to get them. They’re building an army, a modern children’s crusade, in which Rebecca and Daniel may be just the kind of future leaders they need.

If not, they might be just the kind of sacrifice necessary to keep the rest of the faithless in line.

Rebecca had known Miss Marcy was there the whole time. She was careful not to betray that knowledge by looking at her, though, even as she hit the bottom of the stairs and ran straight in her direction. She had anticipated a host of enemies lying in wait for her, in fact, and counted herself lucky when she could only make out one. The bright white shirt and the camera-flash light of the videophone identified her easily.

The devil you know, she thought, steeling herself, telling herself it could only be worse, going the other way. God only knew how many people waited to spring on her around back. She didn’t think the cop could be there, not so quickly, but there was no way to be certain.

She kept running, full tilt, as though making for the woods. But she was ready all the while, and when Miss Marcy came for her—thinking to roll her in one quick sucker-tackle, no doubt—Rebecca lowered her head, let out a cry, and drove herself right into Miss Marcy’s stomach.

They went to the ground together, but Miss Marcy had already lost. Nary a sound—other than sucking breath—escaped her lips as Rebecca pinned her arms with her knees and punched her in the face. Once, twice, three times…

Then, scooting back over her middle as Miss Marcy’s hands flew up to protect her face, Rebecca punched her twice more, this time in the sternum—straight punches, not uppercuts, leading with her two prominent knuckles, just as she’d been taught.

And finally she stood, turning a full circle, suddenly panicking again. Surely there’d be an army coming for her by now. But there wasn’t. Not yet.

Miss Marcy just lay there, curled into a ball, gasping.

She saw the videophone Miss Marcy had propped up on the windowsill. I don’t have time for this, she thought, going to it anyway.

She saw her own face in the screen as she drew near, growing bigger and bigger as she picked it up. It was taking live video of her and feeding it to Miss Marcy’s personal Omni page. The Views line at the bottom indicated there were currently six people watching.

“My name is Rebecca Riggs,” she said to the screen, and suddenly found tears were threatening again. It annoyed her because she was not a crier as a general rule. She fought them down. “This is what the truth is: Second Salvations murdered my parents, and I’m running away.”

She couldn’t know, as she tossed the phone aside and started running again, how famous those words would ultimately become. It wasn’t her name at first—nor her accusation, nor even her admission of deliberate flight—that would catch the attention of so many people. But the video, still in record mode, was already being shared by all six of the anonymous watchers on Miss Marcy’s Omniscience page.

By the time Rebecca made it to the scooter between the road and the edge of the woods, one of the watchers thought to add the caption: This Is What the Truth Is.

By sunrise, that video would go viral.

Marcus Damanda lives in Woodbridge, Virginia with his cat, Shazam. At various times throughout his life, he played bass guitar for the garage heavy metal band Mother’s Day, wrote for The Dale City Messenger, and published editorials in The Potomac News and The Freelance Star. Currently, while not plotting his next foray into fictitious suburban mayhem, he spoils his nieces and nephews and teaches middle school English.