I’m happy to be part of the Witch Emerging tour for Mona Hanna! I’ve been lucky to work with Mona on these books. They are sweet tales with magical characters! As I’m her editor, I don’t have a review, but I definitely recommend you check them out! 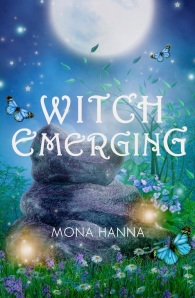 After surviving being hunted by Julius, Brayden and Ariel settle into their married life. Ariel is determined to find the other High Witches to make sure they’re alright. But there’s something going on with her pregnancy, something unusual, and she needs to find out what.

In the meantime, Hallie, an eighteen-year-old witch, is being pursued by Nicholas, a strange young man who knows about her past. What does Nicholas want with Hallie, and how are they both connected to Ariel? And what about Sean, the man Hallie loves? Will they end up together, or will Nicholas’ plan hurt all of them? The two witches will need to work hard to save those they love, and each other.

Hallie got ready to go to work the next morning. She smoothed down the skirt of her long dress, made sure she had her things in her small bag, then headed to the front door. She lived in a medium-sized, relatively expensive home, which she was able to rent because her employer knew the landlord. All of the furniture was finely crafted, and the rugs and other decorations had all come with the home. There was a settee and armchairs of a deep maroon fabric in the front room, along with an ornate dining table and chairs, a bookshelf, and wooden cabinet. She was happy there.

She was about to turn the handle on the front door to leave when there was a loud knock. She froze for a moment, worried it was Nicholas. It had taken her a long time to calm down after what happened last night. She stayed still a moment longer, then opened the door a little, peering out. She nearly fainted at who she saw.

She pulled the door open wider, staring at him. It was him. He was more built, his red hair was a little longer, but it was him. She couldn’t believe it. He just stood there, looking her up and down, as if he was surprised at her appearance too. His green eyes flowed over her, his lips parted slightly. Hallie swallowed loudly, and he met her gaze.

His expression softened, and he looked at her fondly. “Hallie,” he said, and she nearly melted at how deep his voice had gotten.

She took a deep breath. “What—what are you doing here?” she finally asked, her voice light and breathy.

She took in a breath, then remembered he’d left without a word to her and hadn’t so much as written since. She felt anger rise inside of her, and she tightened her grip on the door handle. “Then why didn’t you write? Why didn’t you try to talk to me? All those months, and you weren’t off the ship once? What, were you too busy running around with other women? Why should I even talk to you! You stopped caring about me a long time ago.”

She started to shut the door, her heart breaking at what a mess she was making of things, when Sean slammed his palm onto the heavy wood. He took a step forward, making Hallie step back into the house. He shut the door loudly behind him, then reached forward and held her face in his large hands. She couldn’t breathe. Her heart was racing, and she felt weak and shaky all over. He stared at her, so closely, so strongly, then moved his hands down and put them around her waist. He brought her up against him, then leaned down and buried his face in her neck.

She sighed, putting her arms around his shoulders, sinking one of her hands into his hair. Oh, how she’d dreamed of this.

He kissed her neck. “Hallie,” he breathed, kissing her neck again. “I’ve been dreaming about you. I’ve longed for you. You don’t know how hard it was for me to stay away. I’ve wanted you so much.”

She sighed again, melting against him, unable to believe he was there. She felt so many emotions and sensations she’d forgotten how to feel. She hadn’t so much as kissed a man, but here he was, the man she loved with her whole heart.

He straightened, still holding her, and gazed down at her.

She bit her lip. “I missed you,” she said, her eyes filling with tears.

Suddenly he picked her up in his arms and carried her over to the settee to the right of the room. He sat down with her in his lap, brought his hands to her face, and wiped away her tears with his thumbs.

She sniffed loudly, then wrapped her arms around his neck, snuggling up to him. He held onto her closely. She kissed him on the neck. “How could you leave me like that?” she asked, sniffing again.

He rubbed her back while she nestled close to him, kissing her hair every so often. He finally sighed deeply. “I was hurt, Hallie,” he said. “You told me to leave you alone—you said you didn’t want me. I didn’t know what to think, but I knew you were right: you weren’t going to become strong while I was beside you. I was holding you back. So I left, but I didn’t want to. I wanted to stay with you, wanted to be by your side. Every day I was apart from you hurt. But it was necessary. I just wished it wasn’t.”

His voice broke on the last word, and Hallie lifted her head to look at him. She looked into his eyes and gently trailed the fingers of one hand down his cheek. She was late for work, but she didn’t care—all she wanted was him. She moved some of his hair away from his forehead, and he smiled, looking down. She was aware of his hand on her waist, his fingers gently caressing her side, and she felt heat inside of her. He swallowed loudly, biting his lip. Her breath caught in her throat.

“You always were beautiful,” he said, “but now…” He lowered his head and kissed her neck, but it was different than before. This time her entire body was humming, and his lips moved slowly, his tongue gently touching her skin. 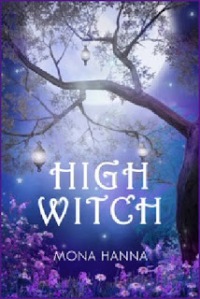 Brayden dreams for thirty nights, tortured by the vision of a beautiful woman. When Ariel Williams walks into his inn, he sees that she’s the one he’s been obsessed with in his night time journeys. But Ariel is fleeing an arranged marriage and keeps shyly to herself, until the worst happens and by mistake she casts a spell on a guest. Brayden works with Ariel to help her control her magic but discovers she’s a High Witch — one of only three witches in the world with a rare kind of power.

Immediately the two must flee; evil warlock Julius wants to enslave Ariel — mind, heart and body. Julius and his lover the High Witch Nadia will stop at nothing to capture Ariel, and the danger threatens to tear Ariel apart from Brayden. Ariel’s only hope is that her love for Brayden and her newly-discovered powers are strong enough to save them.

This is a NOVELLA of approximately 25,000 words

Mona Hanna is an author of fantasy/romance books. She enjoys writing about love, magic, conflict, trials and the joy of overcoming them. Mona enjoys reading, movies, chocolate, and adores cats. She hopes to release many more fantasy books in the years to come.