I’m very pleased to announce Hannah Kollef’s newest book, Juniper, a collection of short stories, including a never-before seen prequel to her Path of Needles! In honor of her publishing, she’s making her other books FREE for July 12-13! If you haven’t read Path of Needles, GET IT NOW! You won’t be disappointed — and I’m not just saying that! It’s a great way to catch up before the sequel — Path of Pins — is released! 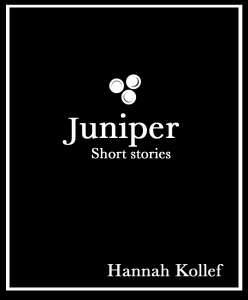 Time storms travel across North America. Prague’s lonely statues come to life, hunting new members to watch over the city. Little girls hunt for needles & nettles in sidewalk cracks. And in one small apartment in New York City, the Fey gather to mourn one of their own.

The world is a stranger place than you know.

Fans of science fiction, urban fantasy and Grimm’s fairy tales will enjoy these short stories and poems from Hannah Kollef, author of “Path of Needles” and “To Wake the Shadows.” “Juniper” also includes an exclusive, never-before seen prequel to “Path of Needles.”

Hannah Kollef was born on the anniversary of Genghis Khan’s death. She believes this is responsible for her poor table manners and love of pillaging.

Hannah earned her BA in Japanese and Political Science at Washington and Lee University. Upon graduating, she decided to pursue writing and published her first novel, “To Wake the Shadows.” In October 2012 she published the first in her new Paths series, titled “Path of Needles.” She also launched her new website, hannahkollef.com, a multimedia collaboration with input from a variety of talented musicians and artists.

​In addition to her novels, Hannah has been published in various magazines including In General magazine and Hometown Quarterly. She has also worked as a freelance copywriter, editor, and social media consultant. She currently lives in Prague, where she works as a Trinity Certified English Teacher.