Welcome to my stop on the FMB Blog Tour for SILVER: Acheron! Check out the extended excerpt below and enter to win a copy! 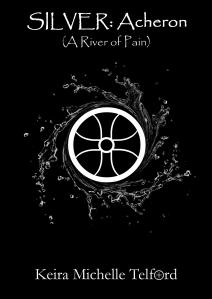 BOOK ONE in THE SILVER SERIES.

Dishonorably discharged from the Hunter Division and banished for crimes she did not commit, Silver struggles to come to terms with her new prison-like surroundings: a segregated area of the city called the Fringe District, populated by murderers, thieves and rapists.

Starving, and desperate for money, she reluctantly accepts the Police Division’s invitation to enroll in a covert Bounty Hunter program: an initiative devised to infiltrate the criminal underworld of the Fringers, and to force the very worst warrant dodging law-breakers to meet their fate–death.

Unfortunately, Silver doesn’t realize that the Police Division is about to up the ante. They need more than little snippets of information and arrests–they need someone to pull the trigger. They need an executioner.

SILVER: Acheron is the first book (a 40,000 word novella) in a 10-book series featuring the character of Ella ‘Silver’ Cross. Set more than 300yrs in the future, the Silver Series takes place in a post-apocalyptic, dystopian world where humans are a species on the brink of extinction. No longer at the top of the food chain, humans are preyed upon by the Chimera–genetic mutants that outnumber humankind 25:1.

aware of the pain in her wrist, Silver pulls out a strip of gauze given to her by the surgeon and wraps it tightly around her oozing stitches. Better than nothing, she surmises. Her fingers wet with her own blood, she backhands some stray wisps of dark blonde hair away from her face. Always in a pony tail, her hair could go days without brushing and you’d barely even notice. She’s beautiful, of course, but not like the girls in Old World magazines. Raised for the Hunter Division, she’s tall and strong. Her shoulders carry a strength that could put some lesser men to shame, and her face hasn’t seen a lick of make-up since her sixteenth birthday.

Sharp, silver eyes look out upon the world with a new found cynicism, and her lips are fully prepared never to smile again.

Fuck Omega, and the lies they’ve smeared her with. Fuck truth and justice, and all the things she’s ever fought for. Fuck love, and all the pain that’s brought her. Fuck dying, like they hope she will.

She’s armed, and ready. With steel boots, a steel blade, a stone cold heart and three full clips of hollow points, she’s got enough to take on the Fringe District … for today, at least—and she’s not prepared to go down without a fight. This place is rough, like the worst neighborhood you’ve ever been to, times a thousand.

It wouldn’t be uncommon for an easier mark to be killed in the street for the hat on their head, or the loaf of bread in their hand.

Fortunately, though, Silver’s no fool. Combat trained from the age of five, she can take on a man twice her size, and her agility and stamina will out-maneuver him every time. She has that, and confidence—in the bucket loads.

Reaching the foot of the bridge, Silver receives her first welcome: a barrage of signs and graffiti intended to drive away those who have come to gloat, or to abuse. Since its inception, the Fringe District has been more than just a prison land, and within it the prisoners—the banished—run rampant.

Success of the banished population, on such a scale, was simply not anticipated; longevity was not considered. In a place crawling with disease, and with the complete lack of an established healthcare system, the predicted mortality rate was high. Breeding was not part of the plan, and by the time it became a noticeable problem, it was already too late. The Fringer population was thriving, despite their circumstances.

Stricter penalties in the Sentinel District ensure more banishments each successive year, but births in the prison Di

strict still outnumber new inmates at a growing ratio of 1000:1.

Hope of something better was abandoned long ago. Behind every depraved, grotesque, and often illegal action you may witness, there is one prime motivator: survival, at all costs.

An every-man-for-himself mentality exists here in the extreme, and this desperation is routinely exploited by the Hunters and Police Division Agents who frequent these parts for their own entertainment.

Everything prohibited in Omega’s superficial utopia, the Sentinel District, is available in the Fringe if you’re willing to pay for it, or if you have the strength to take it by force. Though, it should be said, this approach seldom has a happy ending for the aggressor, and the row of decapitated heads on spikes at the entrance to the Fringe is a testament to that. You cross these people—the Fringers—at your own risk, because they will retaliate.

Keira Michelle Telford was born and raised in the UK. She spent the early part of her childhood in Worcestershire, before the family moved to Wales where she lived for most of her teenage years. In 2006, she moved to Canada. She currently resides in beautiful British Columbia, where she lives with her husband and 9 guinea pigs.