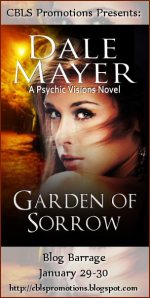 Welcome to my stop on the CBLS Blog Tour for Garden of Sorrow. This one looks to be a good one if you like suspense with your paranormal romance. Also check out the other books by Dale Mayer and the giveaway below!

Her world is in chaos. His world is in order. She wants to help the innocent. He wants to catch the guilty. But someone is trying to make sure that neither gets what they want.

Alexis Gordon has spent the last year trying to get over the loss of her sister. Then she goes to work on a normal day…and reality as she knows it…disappears.

Detective Kevin Sutherland, armed with his own psychic abilities, recognizes her gift and calls in his friend Stefan Kronos, a psychic artist and law enforcement consultant, to help her develop her skills. But Kevin has never seen anything like this case – a killer with a personal vendetta to stop Alexis from finding out more about him…and his long dead victims.

The killer can be stopped. He must be stopped. But he’s planning on surviving…even after death.

“Ouch.” A thin stream of red oozed up from her mud-covered fingers. Whatever that thing was, it had scratched her palm. She stared at the surrounding puddle. Where had it gone? There, beside her right foot. Alexis leaned over for a closer look.

Several voices called down to her. She ignored them, and tugged the muddy piece free. Blowing away several strands of hair blocking her view, she swished the item around in the rainwater and managed to clean off most of the dirt.

Small, white and with a distinctive shape, it resembled a bone. More like several tiny bones barely connected by stiff mud. And oh, God… It looked like…a finger!

Ice settled into her spine. She held a finger.

Her fingers tightened around the bones. Her insides warred to keep the precious item safe while another part of her wanted to throw it far away from her.

Dizziness and nausea fought for supremacy as her vision blurred. Disoriented, she wavered as the ditch before her suddenly lengthened and narrowed, morphing into an interior hallway.

Alexis froze, her horrified gaze locked on the changing scene.

Dear God, what was going on? Her mind raced to sort out the change. How had the dirt bank turned to gray paint? And the sewer smell smothered by heavy cooking odors? Fried chicken?

Alexis stared down the hallway. A young child, caught inside this peculiar scenario, stumbled toward her with both hands clasped over her ears. Tears streamed down her young face, and her t-shirt was inches above the dirty shorts. Bruises decorated her lower legs, and well…dirt covered the rest of her. As if she’d recently been playing in a dirt pile. Alexis tried to run to her, to hug her tight, to protect her…only to find she couldn’t move. Her feet were paralyzed in place. Terror filled her heart.

She opened her mouth to scream. No sound came out.

Run. The scream seared through her mind.

Dimly in the background, loud crashes and yelling could be heard, as if someone gave chase. Fear of retribution accentuated every step the distraught child took. The sound and tone distorted.

Scott’s alarmed voice pulled at her from outside the vision that held her transfixed. Caught between two realities, Alexis jerked toward Scott, the object dropping from her fingers.

It was if a vacuum sucked the dirt walls back into place, with a rush so powerful it forced Alexis to lean forward. Then as if caught in a giant rubber band, the force suddenly released, to throw her into reverse. She flew backwards and landed, once again, on her butt in the middle of the large puddle.

Her gut screamed and bile tried to escape her throat. She shuddered. What the hell had just happened? She swallowed convulsively, willing her breakfast to stay down. Tremors started at her toes and rattled up her spine.

“I – I’m fine.” Was that croaking her voice? The finger… Where was it? More than a little daunted by the prospect of touching it again, she remained seated and eyed the surrounding mud.

It rested on the muddy surface…waiting for her.

Eerie. She hated to touch it again, the last experience too horrific to repeat. She reached for it, but her fingers shook so badly she stopped. Yet, she couldn’t force herself to leave it behind. Compromising, she pulled a tissue from her pocket and gingerly picked it up.

The size bothered her. The vague image of the running child from a few moments ago slammed back. Ruthlessly, she pushed the vision out of her mind. She couldn’t even begin to analyze what had happened. It had been way too weird. Alexis focused on what was important right this moment. Where there was a finger…

She studied the high expanse of dirt wall. She dimly remembered digging her fingers into the bank on her downward tumble. But how high up had that been? The ditch stood eight to ten feet deep.

“Here’s the ladder, Alexis,” Scott said as Mike, another coworker arrived with the ladder. Scott held the long metal structure several feet off to the side.

Scott shrugged and the two moved the ladder to the right spot.

Alexis struggled to position it the best she could near her original flight path. Once the ladder was secured, she moved upward, one rung at a time. At each new level, she stopped and searched. The bone had to have come from somewhere.

“Oh, for the love of God. Alexis, what are you doing?” Scott peered over the ladder at her.

Alexis didn’t answer. What could she say? Three, maybe four feet from the top, a speck of white caught her eye. Reaching between the ladder rungs, she gently brushed some of the dirt away. Another bone, possibly another finger. Vomit lined her throat. She rested her forehead against the steel frame of the ladder for a long moment.

“Scott?” Her hands squeezed the ladder tight. She kept her voice low.

“Yes, beautiful. What’s going on?” He crouched down for a better look, but he was at the wrong angle.

“Are there any police close by?” She cleared her throat, tears suddenly clogging her throat. Willing him to not ask her any questions. “If not, go get one – now.”

Startled, Scott stared at her for a brief moment before disappearing from sight, his heavy footsteps fading rapidly. Mike held the ladder steady. Alexis rested her head against a rung, and waited with her arm wrapped around one side of the ladder. The steel dug into her forehead as she realized something important.

This wasn’t just a ditch. This was a grave.

5.0 out of 5 stars–BEST of the Psychic Visions Books

“I’ve been a fan of this series ever since I read Tuesday’s Child. The whole concept of psychics who work alongside police and rescuers and use their talents to tap into victims and killers really grabbed me. Because of their psychic abilities, these people are special and yet are often outsiders to society, trying to fit in. This is #4 (I think) in the series, and it’s the best so far. with one, platonic with the other–no menages in this book!) and endearing. If you’ve read the earlier books, you’ll remember Stefan and he’s more central in this story. I rate it as a Must Read.”—Amy Atwell “Getting To The Heart of the Story”

“Wow! Dale Mayer has done it again. I’ve read this whole series and it is exceptional. This is the fourth book in the series (I hope there will be many more) and I think it’s the best one yet. I love a book that pulls you in and this one definitely does that. Be prepared to read it from cover to cover in one sitting. A definite MUST read.”—BizzyBee

5.0 out of 5 stars–Dale Does IT Again! Another Page Turner

“I’ve been a student of intuitive development for ten years, and this book could be an instruction manual – boldly going where no one has gone before. Great plot. Great suspense. The characters are realistic. The crime is real. The author’s compassion for humanity shows through in this page turning novel. I didn’t want it to end. I WANT MORE. Gimme more!”—Angelika Love “A Love”

Giveaway Info:
Prize is 15 eBook copies of “Garden of Sorrow” (1 each to 15 winners). Contest is tour-wide, open internationally and ends Feb 4. Must be 18 years of age or older to enter.

Dale Mayer is a prolific multi-published writer. She’s best known for her Psychic Visions series. Besides her romantic suspense/thrillers, Dale also writes paranormal romance and crossover young adult books in several different genres.  To go with her fiction, she also writes nonfiction in many different fields with books available on resume writing, companion gardening and the US mortgage system. She has recently published her Career Essentials Series . All her books are available in print format as well.

To find out more about Dale and her books, visit her at http://www.dalemayer.com, or connect with her online with Twitter at www.twitter.com/dalemayer and on Facebook at www.facebook.com/dalemayer.author.