Welcome to my stop on the FMB Blog Tour for The Curse Merchant! Check out the excerpt below! 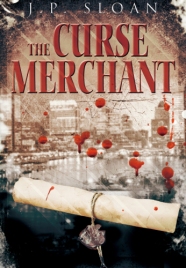 Dorian Lake has spent years cornering the Baltimore hex-crafting market, using his skills at the hermetic arts to exact karmic justice for those whom the system has failed. He keeps his magic clean and free of soul-corrupting Netherwork, thus avoiding both the karmic blow-back of his practice and the notice of the Presidium, a powerful cabal of practitioners that polices the esoteric arts in America. However, when an unscrupulous Netherworker interferes with both his business and his personal life, Dorian’s disarming charisma and hermetic savvy may not be enough to keep his soul out of jeopardy.

His rival, a soul monger named Neil Osterhaus, wouldn’t be such a problem were it not for Carmen, Dorian’s captivating ex-lover. After two years’ absence Carmen arrives at Dorian’s doorstep with a problem: she sold her soul to Osterhaus, and has only two weeks to buy it back. Hoping to win back Carmen’s affections, Dorian must find a replacement soul without tainting his own. As Dorian descends into the shadows of Baltimore’s underworld, he must decide how low he is willing to stoop in order to save Carmen from eternal damnation… with the Presidium watching, waiting for him to cross the line.Excerpt #2

I brought my finds to a table near the microfiche reader and opened up my spiral notebook. None of the books were meant to leave the building, and photocopying was forbidden, so I had to take my notes and glean all I could. At least I was alone.

Or thought I was.

I had finished the chapter on the life of Simon Magus, a Samaritan during the first generation of Christian evangelists who had locked horns with Saint Peter himself, when a shadow fell over my notebook.

I looked up to find the Syrian smiling at me.

I set my notebook casually on top of the Jesuit text as he leaned on the microfiche reader.

The Syrian leaned over and picked up my book with a pausing gesture that at the same time asked for permission and left no room for refusal.

“Simon of Gitta,” he recited. “A widely misunderstood individual, in my opinion.”

“Misunderstood in the days of the early Church usually meant brutal death by torture, so there’s that.”

“Colorful stories aside, any serious student of soul magics would do well to study the life of Simon.” He set the book down and narrowed his eyes. “Are you?”

“A student of soul magics?”

“Oh, no. That’s not my particular bag of tricks.” I elbowed the Jesuit text further behind me. “I just saw a show on cable last night, and wanted to do some more reading. That ever happen to you?”

He lingered beside me, staring down into my eyes. I shifted in my seat, trying not to look horribly guilty of something I had no intention of doing.

“How long have you been a member of the Occidental Lodge?” he asked, finally breaking the tension.

He shook his head in confusion.

I jammed my thumb over my shoulder.

“New policy. Some crap about a restricted section and Lodge members. I just ponied up to get to the good stuff.”

He nodded with a warm grin.

“That makes sense. You did not strike me as the ceremonialist type.”

“Know many ceremonialists, then?” I ventured.

His eyes lifted at the corners.

“You are aware, Mister Lake, that the practice of Netherwork is not kindly viewed by certain elements within the American magical establishment?”

I watched his face for a quick moment, trying to figure out if he was threatening me, or if he was genuinely asking me a question.

“Anyone with a brain knows that,” I whispered.

“The question then becomes, are you a risk-taker?”

“I’m really more of a sure thing kind of guy.”

He smiled and tapped on top of my notebook, making my stomach flip.

“Forgive my intrusion. Enjoy your studies.”

He stepped away, grabbing a book from the top of a nearby table and settling down in a chair almost directly behind me. I looked over my shoulder a couple times, trying not to look nervous. The Syrian was studiously not watching me, which only added to my anxiety.

I am a storyteller, eager to transport the reader to strange yet familiar worlds. My writing is dark, fantastical, at times stretching the limits of the human experience, and other times hinting at the monsters lurking under your bed. I write science fiction, urban fantasy, horror, and several shades in between.

I am a husband and a father, living in the “wine country” of central Maryland. I’m surrounded by grapevines and cows. During the day I commute to Baltimore, and somehow manage to escape each afternoon with only minor scrapes and bruises. I am also a homebrewer and a certified beer judge. My avocations dovetail nicely!