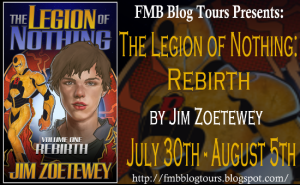 Welcome to The Legion of Nothing: Rebirth Blog Tour stop! Keep reading for some excerpts of the book and a Podcast by the author! 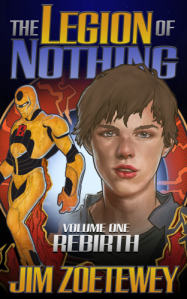 Title: The Legion of Nothing: Rebirth

Series: The Legion of Nothing, #1

“You may kill somebody today. We won’t think anything less of you for it.”

Nick Klein’s grandfather was the Rocket.

For three decades, the Rocket and his team were the Heroes League–a team of superheroes who fought criminals in the years after World War II.

But Nick and his friends have inherited more than their grandparents’ costumes and underground headquarters… they’ve inherited the League’s enemies and unfinished business.

In the 1960’s, Red Lightning betrayed everyone, creating an army of supervillains and years of chaos. The League never found out why.

Now, Nick and the New Heroes League will have no choice but to confront their past.

“What I’m thinking,” Jaclyn’s grandfather said, “is that stealth would be best. Travis and Haley, you both have Chuck’s abilities, correct?”

Travis said, “Yes, sir,” while Haley said, “Right,” in a chirpy voice that seemed out of place.

“Good. Then I think the two of them should sneak in, knock him out, and leave.”

“Unless the mayor senses them and bores straight into their heads,” Daniel said.

“That’s the hole in the plan,” Jaclyn’s grandfather said, amused.

That you could drive a truck through, Daniel sent to me.

In both of our minds, Daniel’s dad said: Listen.

“Since stealth isn’t an option,” Jaclyn’s grandfather said, straightening in his chair, “we’ll have to take the direct route. Larry, could you take the Rhinomobile straight up to the door?”

Larry laughed. “I could drive it into the living room.”

“That’s not what I want you to do. I want you to drive straight up to the house and distract the police and the Guard. Fight them if you have to. Everyone who can’t fly will be with you.

“Everyone who can fly will be going in through the second floor. Nick, you’ll want to hang back while Daniel and his dad subdue the mayor. Someone will need to be watching for aerial attacks.”

“Anything’s possible,” he said. “The Hangmen are in town. They’ve already been beaten back from the mayor’s house once today. When the Rhinomobile breaks through, it’ll be a race between you and Vengeance’s Hangmen. Be there first.”

He moved his head to face everyone at the table, regarding us with his near-sightless eyes.

“One more thing: you may kill somebody today. We don’t want you to, but sometimes it’s unavoidable. We won’t think anything less of you for it.”

“No. It can be avoided,” Daniel’s dad said. “Always. And it should be. Whatever we might think, in the public’s opinion you’ll have killed an innocent man.”

“Not in my experience,” Jaclyn’s grandfather said.

Daniel’s dad stood up. “We need to talk through a few things privately. Nick, is the lab unlocked?”

We—and by we, I meant Daniel, Cassie, and I—were in the headquarters of the Heroes League, the 1950’s and 60’s premiere superhero team. Our grandparents had used it as a secret bunker against evil forces. We were using it to play Rock Band on the PlayStation. Every video game is better on a twenty foot screen.

Except for the musty smell, concrete walls and olive green carpet, it was an impressive place.

Daniel paused the PlayStation, silencing the middle riffs of ‘Enter Sandman’. Cassie was standing on the threshold of the bathroom, chin lifted in defiance.

She wore a costume that was an exact match for her father’s—light blue with the red, white and blue of the US flag covering her chest. I recognized the material: my grandfather had designed it for her father. It was resistant to bullets and most physical attacks, but nowhere near as effective as the Rocket suit—my grandfather’s powered armor. Captain Commando had preferred mobility over protection. You can do that when you regenerate.

Cap’s costume had also been skintight, but I’d never thought about it.

I noticed one other thing. She’d cut off her hair. It was a short, blond brush cut instead of shoulder length.

“Oh,” she said, “it wasn’t comfortable under the mask and it moved around a lot. So I cut it off back in August.”

“You had hair five minutes ago.”

She pulled a blond wig out of her duffel bag.

“Now that we’ve got the important stuff out of the way,” she said, “why don’t we get back to the original point. I’m going out on patrol. Anyone want to go with me?”

Daniel nodded like he’d expected her to say that. He probably had. His grandfather, the Mentalist, was the best known telepath to come out of World War II. His father, Mindstryke was just as well known.

He put down the guitar and stood up. When we were standing, he was half a head taller than me. He was also better looking—literally tall, dark, and handsome. Think black hair, skin a little darker than tan, and a face that reminded me a little of Leonardo DiCaprio in Titanic.

“Why?” Cassie said. Whether her tone had an accusatory edge to it or not, I believed I heard one.

I tried to think of a reason. I couldn’t put it into words. Grandpa had taught me everything he could about how the Rocket suit worked, how all of his inventions worked. He’d arranged for a friend to teach me how to fight. I’d learned a lot from both of them, but how was I supposed to live up to what he’d done?

Jim Zoetewey grew up in Holland, Michigan, near where L Frank Baum wrote The Wizard of Oz and other books in that series. Admittedly, Baum moved away more than sixty years before Jim was even born, but it’s still kind of cool. He’s a web developer, a religion and sociology major, and the author of the superhero series The Legion of Nothing. He’s also not sure why he’s writing this in the third person, but he’s never seen an author bio written in first person and doesn’t want to rock the boat.

15 thoughts on “FMB Blog Tour: The Legion of Nothing: Rebirth”