Great Minds Think Aloud Independent Publishing is celebrating their newest release, “Forgotten” by Doug Lucas with an Amazon Free Day! All of Great
Minds current releases will be free for one day only, Easter Sunday, April 8th, on Amazon.com. Go and grab these amazing titles listed below:

“Conversations With a Dead Man” by Doug Lucas

“The Man in the Mountain” by Doug Lucas

“The Spirit Archer” by Mike Evers

ALL ABOVE TITLES FREE! FOR ONE DAY ONLY! ALL IN HONOR OF GMTA’S NEWEST RELEASE “FORGOTTEN” BY DOUG LUCAS! OUT APRIL 8TH, EASTER SUNDAY! 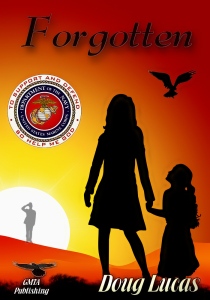 Great Minds Think Aloud Literary Community will be publishing “Forgotten” by Doug Lucas, the release date is 4/8/2012. This novel will be available in all e-book formats on Amazon, Barnes & Noble, and Smashwords.

After retiring from the Marines I went to work for the Pennsylvania State police as a Forensic Photographer. I liked that job a lot because it was, for the most part, very quiet and peaceful—you might say dead-end. After working at that for a few years I became interested in Forensic video analysis. I think my main reason for interest in that field was as a way of proving to my father I could make a living watching television.

I am now totally retired from all forms of work, with the exception of those small requirements my wife now inflicts on me—tasks preformed for little or no pay, I might add. My lovely and gentle wife added to this blend of joy and frustration by acquiring an attack dog for home security. Very few people have the slightest conception of the sense of failure a former Marine achieves as he walks behind a six pound miniature Yorkshire Terrier, appropriately named
Trouble.

With the profits from my book sales, I hope to be able to afford a “pooper scooper.”

Historical fiction has a foundation of truth but that truth is often shrouded in fiction. Some claim that only time and distance can separate the two.

We have all lived through events that have shocked or changed our nation.

The assassination of Martin Luther King, or John and Robert Kennedy, men traveling into space, and landing on the moon, and of course the bombing of the World Trade Center; these are just a few examples that have occurred in my life time. These are the pivotal events that surround us I and others think we know all of the important facts.

But do we remember? Ask yourself or a friend what date any of these events happened on, see if you or they can give the exact date or even some of the facts surrounding any of these or other major past events of your lifetime.

Americans are noted for their short memories, we invented the term “Attention Deficit Disorder” to describe it. We immerse ourselves in an event for a short time span, then quickly lay the event aside and move to the next. If those events didn’t or don’t affect us directly—-they are quickly forgotten.

23 October 1983 is one of those forgotten events. One of those events where we felt we knew all the facts and then it was quickly forgotten. I ask one simple question—“Do you really know all of the facts?” There are hundreds of these events, forgotten by all but those who lived them.

I invite you to read “Forgotten”, separate the history from the fiction. Another term to remember would be “Plausible Deniability”, facts that did happen are handled in a manner that allows them to be denied by those who caused them to happen. Separating plausible deniability from fiction can be almost impossible. At times this is by design of those who use the term.

When you’ve finished reading this “Historical Fiction”, ask yourself if you have forgotten.

You must decide, what is fact, what is fiction, and what could be plausible deniability shrouding truth.

OTHER WORKS BY DOUG LUCAS

Doug Lucas is also the author of “The Good Servant” published by Gypsy Shadow Press in 2011, “The Man In The Mountain” published March of 2012, and “Conversations With a Dead Man” published January 2012.