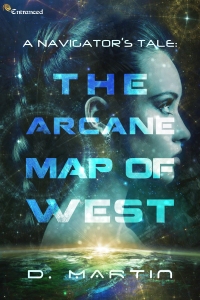 A dangerous man and an unbelievable offer—she should have run….

Starship navigator Hanna Baskira is entangled in a job contract with a hostile merchant-trader who doesn’t trust women pilot-navs. Captain West has hidden agendas. He’s also the commander of an elite military crew. They’re the intersystem government’s secret weapons—and the captain is the most dangerous weapon of all.

He plans on using Hanna in his espionage against an intersystem rebel network, but the captain has a thing about sharing plans…. And she has trust issues with the military.

If she wants to survive her new job, Hanna must trust the unpredictable captain of secrets and resist her attraction to him.

D. Martin likes science and finding out how things work. She has a science degree from Eastern Illinois University, where modern dance and creative writing also caught her interest. Her professional career as science researcher has ranged from biochemistry to industrial chemistry applications. She retired to pursue a lifelong dream to write.

She believes a person can never have too many books. She reads everything, but is fond of Sci-Fi fantasy and romance. She’s a sporadic gardener, who’d rather write than pull weeds. World cultures and their foods fascinate her. She loves Sci-fi movies. She once wanted to be an astronomer and adores the NASA app on her phone.

She lives in the Midwest with her husband and daughter, who are both very understanding when she’s off the planet writing.