Welcome to my stop on the FMB Blog Tour for The Princess and the Prepper! 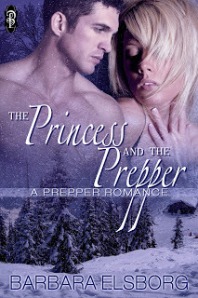 Title: The Princess and the Prepper

Lili knows she shouldn’t accept a lift from a stranger, but as usual, she leaps from one disaster to another. The consequence is being stuck in the middle of a snowy nowhere wearing next to nothing, and this time, being unprepared looks likely to kill her.

Grant lives in an isolated cabin for a reason. He’s prepared for almost every eventuality. The last thing he wants is some needy person interfering with his ordered life. When he gets into bed with a woman he rescued from certain death—just to warm her up, of course—Grant discovers something else he’s not prepared for. His heart opening.

A match made in heaven, until secrets come knocking. Lili is not just a simple woman in need of shelter, and unless she can survive dealing with her background, it doesn’t seem possible the happiness that’s fallen out of a blizzard can heal Grant’s own past.

I’m going to die. It was a surprise to find herself so calm. But it was the truth. She was going to die. No way would she last more than a few minutes in these temperatures. Her body was already chilling, her teeth chattering, the cold seeping into her designer boots. Blinking snow from her lashes, she hugged herself, tucking her fingers under her arms, the wind biting into her with sharp teeth. The road showed no tracks from a vehicle, other than the one she’d fallen from. She swiveled in a circle, checking for any signs of life. All she saw was a long, empty road lined with pine trees.

Lili gritted her teeth and set off after the truck. Maybe it had stopped around the corner and he was teaching her a lesson. Dieter was always teaching her lessons. Every breath she took was like inhaling shards of ice. At least her feet were dry but that wouldn’t last. These boots weren’t made for walking. Wasn’t that a song? Weren’t made or were made? Hardly before she’d completed the thought, a heel snapped. She stumbled and then limped on. Warm, fur-lined boots lay in her suitcase. She’d stuffed her gloves in her coat pocket. Why hadn’t she thought to grab her bag from the car before she begged a lift?

She knew why. She’d have been forced to wait until Dieter unlocked it, and then he’d have stopped her with words or actions. Leaving everything had been the only way she could escape.

What had he thought when she’d not come out of the restaurant bathroom? How long had he waited before he’d gone looking for her? Which way had he driven? Might he pull up behind her? What should she do if he did?

I’d get in his car. What choice do I have?

Her shaking grew more violent, her body smothered in goose bumps, even, she suspected, her eyes. She’d finally done it, run away, and she’d rather die than go back. Except now that dying was more than a possibility, the word mistake echoed ever more loudly in her head.

As she grew colder and her steps slowed, her mind wandered to what she wished her life had been. Lili wanted to fill her head with happiness because then dying might not be so hard, but there were so few truly happy memories that depression settled more heavily on her shoulders. She wasn’t a naturally unhappy person. She’d learned early on in life to make the best of any situation, but there was no upside to being half-naked in a snowstorm. Her teeth chattered uncontrollably. Cold and sadness seeped through her skin and trickled along her veins.

Somehow she kept moving, hobbling down the road. The longer she could keep going, the more chance she had of surviving. For all she knew there was a house around the next bend. If not that bend, then the next. She wasn’t going to give in until…a wolf stood a few yards in front of her.

Lili stumbled to a halt. Oh damn. Falling asleep in a snowdrift didn’t sound so bad but being eaten by a wolf? She didn’t fancy that at all. The wolf made a sort of bark-howl and bounded toward her. She tried to form the words, “Nice doggy” but her lips were frozen. She stayed right where she was, closed her eyes, and braced for an attack. When it didn’t happen, she opened her eyes to see the wolf had stopped a couple of feet away. It made the weird noise again. Probably calling for reinforcements. Don’t bother. I’m not much of a meal. She moved around it and carried on down the road. A few steps later she’d convinced herself it hadn’t been there.

This giveaway  is tour wide for a eBook copy of The Princess and The Prepper by Barbara Elsborg! Ends 04/04/2013. Please use the Rafflecopter HTML below.

The Princess and the Prepper Giveaway

Barbara Elsborg lives in West Yorkshire in the north of England. She always wanted to be a spy, but having confessed to everyone without them even resorting to torture, she decided it was not for her. Vulcanology scorched her feet. A morbid fear of sharks put paid to marine biology. So instead, she spent several years successfully selling cyanide.

After dragging up two rotten, ungrateful children and frustrating her sexy, devoted, wonderful husband (who can now stop twisting her arm) she finally has time to conduct an affair with an electrifying plugged-in male, her laptop.

Her books feature quirky heroines and bad boys, and she hopes they are as much fun to read as they are to write.

Decadent Publishing is current accepting submissions in all sub-genres of romance, including their ongoing series’.

2 thoughts on “FMB Blog Tour: The Princess and the Prepper”