May I present to you, the Bewitched cover! This is the next novella in the Heven and Hell line, this time about Kimber. After you’re done gazing at the cover, scroll down for an excerpt and the trailer! 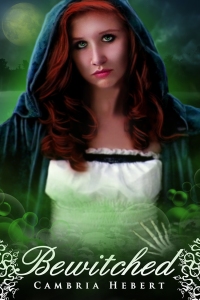 Title: Bewitched (Heven and Hell #2.5)
Genre: YA paranormal
Publisher: Cambria Hebert
Release date: October 5, 2012
Format: Ebook only (for now)
Bewitched Blurb:
For years, I accepted that Heven was more popular than me. I never liked it but I lived with it. I walked in her shadow, I stood by her when no one else would. When I finally thought her spotlight was mine things began to change. She began to change. Now she hardly ever calls me back, she spends all her time with her hot new boyfriend and everyone at school thinks she’s back on top. She had it all. But apparently she wants more. She wants Cole – my boyfriend. What’s worse is that it looks like she got him. I’ve had enough and she’s going to be sorry. Why?Because I am bewitched.

Working out was for jocks. Homework was for nerds and I wasn’t a jock or a nerd. Yet, here I was, sweating through my favorite Victoria Secret yoga pants and tank with a headache the size of Macy’s. Learning about my powers was hard work. I thought it would come naturally. My brain was hurting from concentrating and my muscles were actually sore from effort. I thought longingly of the potion in the green bottle that Hecate had given me—a little sip would make it that much easier to use my powers, but she took it away. Apparently, I had all the power she wanted me to have. It kind of pissed me off.In fact, I was feeling pretty disgruntled all around.

I was hot, I was sweaty, my head hurt and my hair was frizzy. Not to mention I had been wearing sneakers far too long. Thank goodness Hecate was gone. I actually had been glad not to be alone after the “bone incident,” but now I was ready for some alone time. I felt stronger.

Feeling strong plus feeling disgruntled equaled somebody was gonna get hurt.

I was standing in my yard near the lake and I glanced up at the moon before heading inside. It was low and swollen tonight—a haunting moon. It sent a shiver up my spine. I thought briefly about going to Heven’s and treating her to a little of what she deserved. I even looked toward the driveway as I walked, but I wasn’t going anywhere looking like this.

I went into the house and began climbing the stairs. Halfway up, I heard a noise in the kitchen and I paused. My parents were still out of town. It wasn’t the maid’s day to be here… unless she came early. Another thud in the kitchen had me spinning on the stairs to see what it was.

“Mary?” I called out. “Is that you?” Maybe she switched her schedule around and I didn’t know about it. Maybe I could get her to make me a latté.

No one answered, and the noises in the kitchen fell silent. I stopped at the bottom of the stairs and listened, wondering if I had heard anything at all. “Hello?” I called again, this time more unsure. This time a fine chill raced up my back.

Suddenly being alone in this big house was scary.

Okay, I wasn’t hearing things. Someone was there.

I stepped off the stairs and walked through the foyer in the direction of the kitchen. I heard the cat hiss and I paused again. Clover was too lazy to hiss at a mouse. Something in my stomach turned cold and hard.

I looked over my shoulder at the massive front doors to the alarm keypad and the distress button.

But it was too late for pressing buttons.

Clover burst around the corner with a hideous screech and barreled into me, hitting me in the knees and causing me to stumble. The cat didn’t even stop. I could hear his claws scraping frantically across the tiles. “What the…” I began as I straightened, but then something lurched around the corner after the cat.

It stood about a foot taller than me with wide shoulders that were uneven looking—one was lower than the other—and a wild mane of bushy orange hair that seemed to create a cloud around its pasty, white face. Its lips were black and it had a nasty row of teeth that had seen a lot of decay. It had large purple circles around its eyes, which seemed to have no color at all.

I screamed and took a step backward, and the thing grinned. I went running but it lunged and caught me around the wrist, pulling me back. I struggled, kicking out, but it was no use, his grip was too strong.

Without any warning it reached up and snatched my silver pendant right off my neck. “Hey!” I screamed as it shoved me away. I fell onto my butt and stared up at the glittering silver heart as it dangled from the nasty clown’s hands.

Cole had given that to me. It was the last gift he had given me before we broke up.

Anger surged into my chest, making me hot. “Give that back.”

Freaky Clown gave me another frightening grin and ran back into the kitchen, disappearing from sight. I ran after it, running into a solid wall of… offensiveness.