Today’s new release is a story of young people, of coming of age, of young love: Sarah Smiles by Seanpaul Thomas. 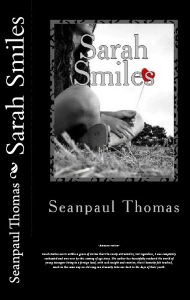 It’s Nineteen ninety one and eleven year old Paul and his family have just moved to the  climatic sunshine paradise of Cyprus with his father’s work as an army sergeant with the Royal Engineers.

On Paul’s first day at school, his third first day in as many years, he is befriended by the dominant school bully Michael who takes young Paul under his sinister wing, introducing him into the fast and furious game of break time football before sadistically snatching it away from him and the chance of making more new friends.

Michael though only wants to hang out with Paul after school since they are neighbours and the only same age kids on their respective army estate. One day after school Michael shows Paul the beautiful but wildly dangerous and adventurous world of the surrounding wasteland caves and valleys around the estate. But things take a turn for the worst when Michael bullies Paul into steeling some cigarettes from his dad’s army bar and the two run off underneath a local bridge to try and smoke them. Here Michael is ‘accidentally’ urinated on from the top of the bridge by another young boy, Ben, who Michel and Paul chase into a local park to beat up for his prank.

Paul wants nothing to do with the savage beating, but has no choice in the matter with bully Michael over dominating him and forcing Paul to hit the boy too. The young boy though is finally saved from a further beating by his older sister, Sarah, a pretty tomboy girl from Michael and Paul’s class at school.

Paul is completely spellbound by Sarah and not only because of her pretty and athletic looks, but also her rough and tough no nonsense edged ways and handling of the bully Michael who, as of yet, has never been spoken to or stood up to before, the way Sarah stood up to him in the park.

From here on in this incident sets off a series of events that brings the homely, well rounded Paul and the troubled young Sarah’s worlds together and the two begin an unusual but adventurous and exciting friendship that will stay with them for the rest of their lives, as they both become a solid shoulder for each other to cry on while helping one another to confront their inner most fears and
demons. From the mystery of Sarah’s Mother’s sudden disappearance to the trials and tribulations of growing up on a British army base, Sarah’s domestic abuse issues living in a broken home with her alcoholic father to Paul’s school bullying from the borderline psychotic Michael! Summertime adventures on the gorgeous Cypriot beeches and bondoo wasteland valleys to haunted houses, dealing with growing up on the move and first teen romances. All the while dealing with that delicate yet rough transition into teenage-hood.

Born in London, but grew up in Cyprus, Germany, Wales and Scotland as an army brat, I was diagnosed with the travel and writing bugs very early in life.

Writing, reading and traveling are pretty much my main passions in life, but I also love outdoor sports too from Rugby and Hiking to Tennis and Boxing.

I’m writing another few books right now, one is about a young man in a dead end job and life who discovers that he has a terminal illness so decides to withdraw all of his savings from the bank and starts doing all the things that he’s always wanted to do, but was restricted by the rules and regulations that society feeds into us from birth.

The other book is about my recent four month kick ass and awesome back packing adventure through Eastern Europe last year, from Estonia to Sarajevo. I’m also looking forward to more traveling and writing adventures in the near future. I also try and treat each day like it were my last as you miss one hundred percent of the shots you don’t take in life.

You can connect with me here at www.http://seanpaulthomas.com/